“Geoff is uniquely accomplished and experienced across all aspects of music making.
It is rare to find such abilities all in a single musician. He was a massive part of my success -
as an arranger, producer, musician, bandleader, collaborator, songwriter
and as a killing bass player.”

“Geoff is a brilliant producer. His dedication to the music he loves is second to none.

He supports and inspires the artist with constructive and productive energy.

He's a force to be reckoned with!”

“ I can understand now why the list of famous people Geoff Gascoyne played with is so long. He is not only an amazing musician and producer, but also an all around great guy. It's a real pleasure working together with such a creative mind and a true supporter of the music I love to sing and play. Thank you Geoff!”

“We’ve made a few albums with Geoff and I’ve always been blown away by the quality
of the finished product and how easy he made the process.”

“It's been my pleasure and good fortune to work with Geoff on and off for close to 20 years. Such a terrific talent - he’s always played both electric and upright bass on my gigs, with total sensitivity and musicality, I’ve learned a lot from him and always try to catch him playing live with other artists because he’s so interesting to watch. He’s a great jazzer but also has a pop sensibility which is often an all too unusual combo. I love working with Geoff because he just... 'gets it'.”

“Geoff Gascoyne is an exceptionally talented artist and during his long tenure in my band he was not only a stalwart bass player but also  found the time to design a number of CD covers for my label before moving on to greater achievements.”

AN ALBUM FOR CHRISTMAS

New for Christmas 2017 a collection of traditional themes arranged by Geoff
for big band and string orchestra featuring Iain Mackenzie on vocals.
Recorded at Angel Studios.

Each one a self contained app including thousands of recorded loop in many different styles ideal to use as a playalong, composition or teaching tool. 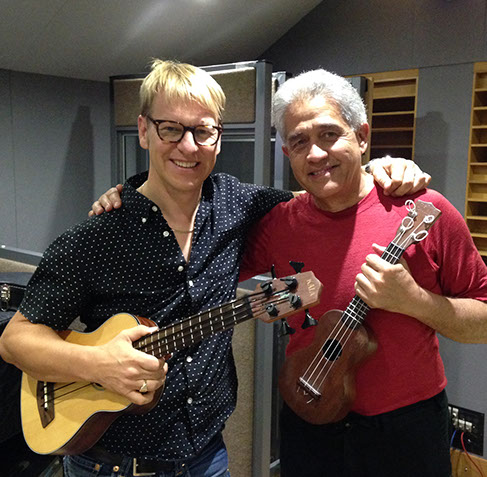 Geoff has been a professional musician for over 30 years. He has worked with such diverse artists as Michel Legrand, Everything But the Girl, Van Morrison, Georgie Fame, Sir Willard White, US3, Sting, Charlie Watts, Benny Golson,
Bill Bruford, Jacqui Dankworth, Bob Dorough, Mari Wilson, Eddie Izzard,
The Mingus Big Band, Peter King Quartet, John Martyn, Dianne Reeves, Guy Barker, Claire Martin, Eartha Kitt and he played a major part in the rise of Jamie Cullum with whom he worked exclusively from 2000 to 2007.

Geoff has appeared on over 100 recordings and has toured the world many times. He has performed in a West End stage show ‘Lenny’ directed by Sir Peter Hall and featured in a Hollywood Movie, ‘The Talented Mr Ripley’ directed by Anthony Mingella. He has recorded 10 CDs as a band leader and has arranged and composed music for countless others.

In the last 10 years Geoff has turned his attention to music production work. As well as producing albums for Jacqui Dankworth, Jamie Cullum, Josh Kyle and San2 and his Soul Patrol he has composed music for a series of Library recordings for the legendary KPM label.Geoff is also the producer of the highly regarded series of 'Sessionband' applications for iPhone and iPad. Currently there are 8 of Geoff’s apps available in the iTunes store, Jazz Vol. 1,2 & 3, Blues, Rock, Country, Drums & Ukulele.

He is Professor of jazz bass at the Guildhall School of Music and is head of bass department at London School of Contemporary Music. (LCCM)

Geoff is married to Australian jazz singer Trudy Kerr, has 4 children, 2 dogs
and lives in Kent.